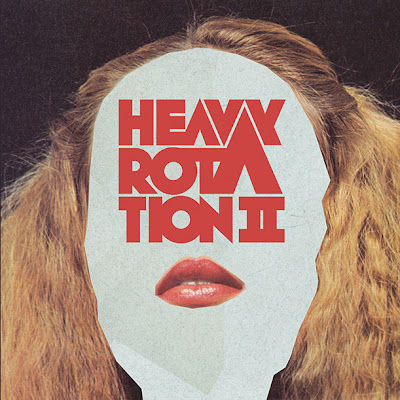 Heavy Rotation 2 is about to hit the stores soon, and sees the return of the cosmic-european trio of Albion, Spacelex and Dea to the frontiers of the edit desk, this time joined by the serious sidekicking of Emil Doesn't Drive. Fans of the blog should already be familiar with Albion since back in 2009, if not sooner. The first volume was a deep plunge into the same vaults of disco obscurity that has been the source for Albions classic mixtape series dating back to the CBS era, and volume two is no exception.
The Heavy Rotation team of cosmic explorers has for this trip as well as the previous manned the vehicle that is Frisbee Records (run out of Berlin by Spacelex), but I'm thrilled to say that their next mission will be on the Blackdisco label (run by Lovefingers & Nitedog in the U.S.A.), one that has hosted previous voyages by the likes of Basso, Alexis Le-Tan & Justin Vandervolgen.
And if you don't like waiting for good things to come, and want to have this slice of cosmos right away, Oye Records in Berlin has had the privilege to receive a limited first batch of these darlings. Go get one here, just don't be fooled by the incorrect release date.