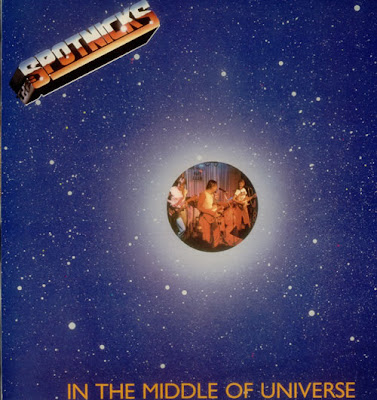 Spotnicks was not a band in the classic sense of the word, but more of an institution that carried on in various constellations for decades, spitting out records in a variety of styles and quality based loosely around the surf sound of the 1960's. Their gimmick however, was the cosmic aesthetics of the space age (which I'm sure gave them a lot of gigs in the USSR). This gimmick played out well even long after the race to the moon was won, and gave them entrance to the cosmic side of the disco spectrum when 1978 came around: when the band somehow ended up in the hands of a bunch of french guys who cut the amazing electronic disco record Never Trust Robots with them throwning in some surf riffs here and there.
Anyway, on to 1983 and the band sees a new formation away from the instrumental surfing to a more rock oriented format with actual songs of their own, but not without a cosmic touch. The title track off this record is a loud bass-driven sleeze-fest with Phil Collins-size drums that works really well as a late night anthem, complete with a healthy dose of synth swooshes and the chatter of the space station control room during the guitar solos.
SPOTNICKS - DROP ME IN THE MIDDLE OF THE UNIVERSE
Upplagd av SERGIO RIZZOLO kl. 14:14