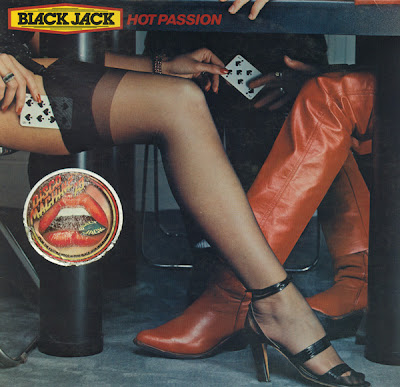 As some of you may recall I did an edit some time ago of a track by Richard Schönherz called Between Judgement And Madness, which I released under my own name with the title Habla Taco Marijuana. I gave it away as a christmas present here in 2010 and ever since that it's been living a life of its own (someone even put it on Youtube).
By chance, I was digging through my own collection and stumbled upon the Black Jack record, which I had bought for the wonderfully sleezy Jungleman Jive (as it was re-edited by Loud E). I thought I should give the whole record another chance and when I came to the title track, it turns out it's a semi-cover of that very Schoenherz-track.
It's not so surprising of course, since Peter Hauke who is behind Black Jack also produced the Schönherz record (and they're both in the extended circe surrounding Kurt Hauensteins Supermax). Schönherz is also part of the production team on the Black Jack record, and so is drummer Hartmut Pfanmüller who plays on both those records.
Very much a friendly affair, and a nice reinterpretation which speeds up and tightens the groove from the 1978 version, leaving out the long and spacey interlude which I also cut out on my edit. There's some different synth figures here that are bordering on cheesy, and the harmonica is a wierd touch. All in all it's a bit more stiff and mechanic in it's approach, but with a coked out sleezy charm that complements the rather pretentious aspect of the "original".
BLACK JACK - HOT PASSION
Upplagd av SERGIO RIZZOLO kl. 13:30