THE AMBASSADORS WILL SEE YOU NOW 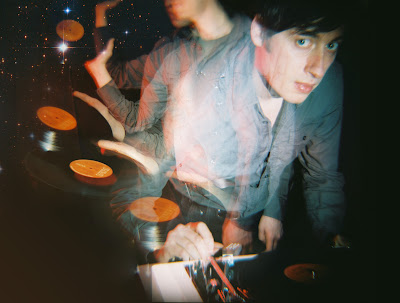 DJ and musician Albion is known partly as one of the prominent guidance counselors of defining the cybernetic disco sound with a series of mixes for the now defunct CBS radio network, and partly for being responsible for the brilliant act (and milestone in recent years of Swedish disco history) of putting Beppe Loda outdoors on the rooftop of the famous Kulturhuset in downtown Stockholm, together with his colleagues Ella & Karolina of the scarce but qualitative club Rymd-Disko.
Now the digger who is reputed to have one of the craziest disco collections in Sweden have assembled a collection of re-edits for the aquired tastebuds of the multi-national diplomats of the Ambassador's Reception, home of Loud E, Tako & Stevie Kotey.
The vinyl EP that is called Space Time Continuum is already available for purchase, and reads as a recipe for a four dish meal that will satisfy all your cosmic needs. There is the exotic and hard-edged Voodoo Safari, the cold and precise Thunder Strikes, along with the cheesy syntheziser squeeze of Milky Way and the title theme of epic cosmic proportions, ...the Space Time Continuum!

I have been searching for a digital copy of Albion's 'Space Time Continuum' EP from last year for ages....I don't have decks anymore so I was hoping that there would be a digital release of it at some point?
If you know where I could buy a digital copy that would be great, if not would you be willing to swap a digital rip for something (I have hundreds of gigs of all sorts of weird & wonderful dance/electronica tracks from the last 40 years, I am sure we could find something that would make ya happy!

ps> the Albion mediafire link is dead as I am sure you already know.