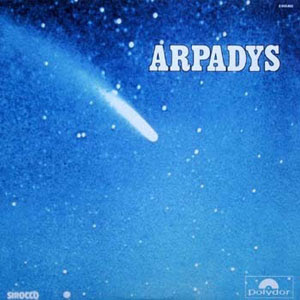 In case you haven't heard, the biggest event in contemporary disco history this year is only a few days away. The french studio assembled group Arpadys, featuring the cosmic disco pioneer Sauveur Mallia, are playing live for the first time ever on the 30th of April in London.
This group of musicians were the backbone of almost every disco production in France during the 1970s, and have become legendary in their own right for their work with the library record company Tele Music, cooking up a cosmic stew of records under the names Arpadys, Spatial & Co and Disco & Co to be used in film and television.
The original records are solid eBay material, unless you dig deep like my friend Kinski and find cheap copies in Mexico, but with modern day bootlegging most disco freaks have their neat pressings of cut like Stone Roller and Monkey Star safely on the shelves.
And thanks to the true Disco academics Bill Brewster, Frank Broughton and Alexis LeTan of DJHistory, the catalogue of Tele Music is being reinvented with the aid of todays equivalents in disco pioneering on the Tele Music Remixed record, which we hope to see on vinyl as well. These guys (who wrote the biblical Last Night A DJ SAved My Life) are also the ones responsible for bringing this french group out of the shadows of history to perform under the Arpadys name, along with the launch of the Vince Aletti book The Disco Files.
Here's an edit by Filippo Moscatello of the laid back Funky Bass:
ARPADYS - FUNKY BASS (BERLINMACHINE EDIT)
...and my favourite Sauveur Mallia cut from Automation Vol. 2:
SAUVEUR MALLIA - REGGAE DIRECTION
Upplagd av SERGIO RIZZOLO kl. 04:33