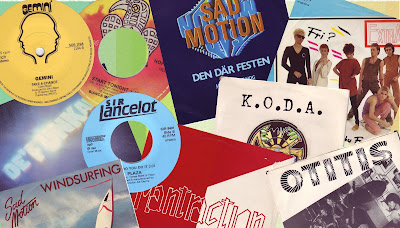 As you may know, I've got a soft spot (and very high cheese-tolerance) when it comes to the music of the disco era produced in my native country Sweden. I think at least every third post here at the Academy is tagged "scandinavian".
So I was awe-struck when I discovered Lovebugs mix Up North themed entirely around scandinavian disco & boogie of the 1980's. It's just so good I kind of wish I had made it myself. Somewhat reminiscent of the Top Nice-teams Svenska Pärlor mix I posted some time ago now, this mix focuses solely on the kind of pop-boogie sound that many have linked to the Sir Lancelot label. Some of these bands (Extra, Mantraction) could have been labeled new wave, but it seems to have been all a blur during those crazy pastell-coloured years. The odd number is definitley the christian disco of De'Funkar.
Lovebug is part of the german radio/club outfit Bleepgeeks located in Ulm, which also has an exceptional blog stuffed with obscurities.

Nice article, thanks for the information.
sewa mobil