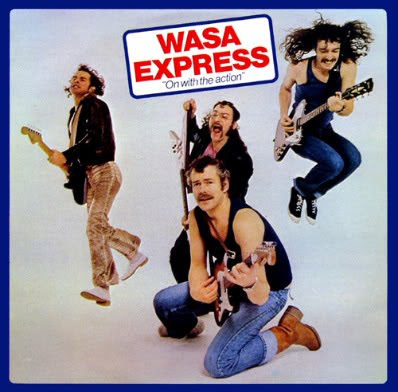 In 1978, only a year after Giorgio Moroder unleashed his futuristic smash hit on Swedish discoteques (you know the one where Donna Summer feels love) - drummer Åke Eriksson conviced his bandmates in the boogie rock outfit Wasa Express to record this tounge-in-cheek take on the italo disco sound, humoristicly done with nonsense lyrics and high-pitched smurf-like chants. But to judge from the outcome of this playfull mock hommage, it seems they might have found themselves actually enjoying it. Why else would they have spent their precious time away from the safe poses and riffs of their regular rock'n'roll repertoire to deliver such a spaced out excursion of disco perfection.
Again, I have to give credit to our friend V! (Oozlum) for spotting this one.
WASA EXPRESS - GET UP
Upplagd av SERGIO RIZZOLO kl. 09:07

You're very welcome!
I take much pride in being able to supply obscure cosmic disco to cats named Holly.

thank you for your support! I've started doing quite a mash up or how would i call it and i would love to dedicate this unfinished work to you as a little sympathy to all of music that you share here with us all!

Wow! Thanks Mr. V!
Sounds awesome. I will give this a proper posting soon.