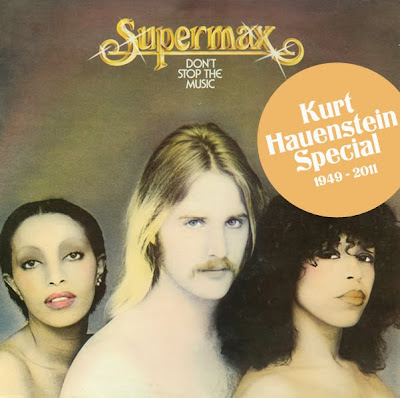 One of the greatest heroes of cosmic disco has passed on to the next level. Musical genius Kurt Hauenstein left this world yesterday, at the tender age of 62. But his life offers a rich and comprehensive history in the creation of some of the greatest music ever made. Which surely served as a spark for another Disco Academy Special. In the upcoming posts we will explore some of the most interesting productions signed by this Austrian musician, starting off with his most prolific creation: Supermax.
The title track of the 1977 album Don't Stop The Music (the bands first or second depending on which sources to trust) is a tribal psychedelic trip of epic proportions, featuring the blocky synth-chords that became a trademark of the Supermax sound.

Before the word wigger entered the dictionaries and denounced the efforts of any respectful popcultural exchange between ethnic groups (i.e. whites and blacks), Kurt was the proud posterboy of a multicultural approach to music and to inter-racial relations.
One of the songs of this albums, Watch Out South Africa, Here We Come, can clearly be interpreted as a prophecy of the bands 1981 tour of this apartheid-ruled region. As the story goes, they "were the first multiracial band to tour South Africa. Despite near constant death threats, they played 21 shows causing quite a political scene and earned Kurt 'no-entry' status to several countries"(quoted here) In a self-documented video from the tour, the headlines of daily newspaper Star reveal the bands involvement with the socialist organisation AZAPO.

The swedish balearic rock band Tiedye (responsible for last years summer anthem, the "remix" of DJ Kaos Love The Night Away) announced over a year ago that their full length album would feature a guest appearance by Hauenstein on vocals. We're all hoping that this now posthumous release will make its way to the public soon.