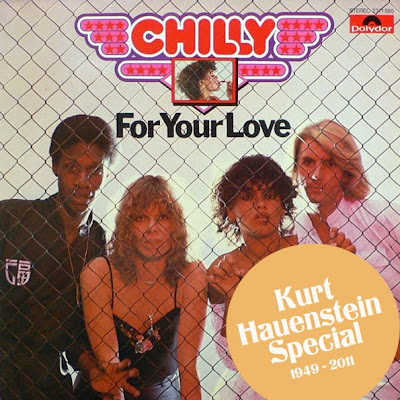 Having set up his dream band and soon-to-be life project in Frankfurt with a crew of exceptional german musicians (of which keyboardist Richard Schönherz he had collaborated with on other projects as early as 1971, and Christian Kolonovitz he had met in a studio in 1975), Kurt ignited the sparks of a blooming array of studio collaborations all around Germany.
While most of these guys had their roots in psychedelic rock and kraut (like the prolific producer Peter Hauke) the new and genre-defying direction of Hauensteins Supermax granted them both access and high esteem as studio musicians in the emerging business of the disco sound.
In a cultural context where disco music could neither rest upon or be bound by the foundations of soul or rythm & blues, the sonic innovations of these long-haired krautrockers was much appraised. In the year following the first Supermax record, almost the whole band served for producer Bernt Möhrles project Chilly, delivering well-orchestrated yet raw disco in the shadows of the Chilly models/singers (note the puzzling weight gain and afro increase of the dude on the left side for the picture on the single cover, from what appears to be the same photo shoot as the albums).
The track Dance With Me featured on this record is a spaceous and chilly (no pun intended!) electronic trip of cosmic disco, and definitely stands out among the rest. Besides handling the bass and doing the additional vocals in the break, the arrangement of the song is also signed by Kurt.

Another wonderful cut - and great information - thank you!