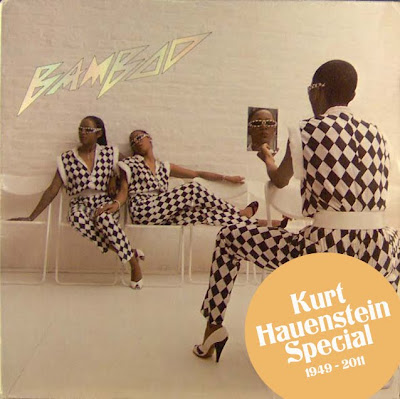 The Bamboo record of 1979 is a sought-after rarity of cosmic disco, and by cosmic I don't mean to reference the italian Afro Cosmic sound of Loda & Baldelli, which in this case had little or no relation to the cosmic sound that Hauenstein envisioned. The hard-driving epic that is Spaceship Crashing has been bestowed the term cosmic simply because there is no other way of describing it. And of course, there is the theme of spaceships and spacetravel in two of the records tracks.
This was Hauensteins own pet project after settling into the Hotline studio in Frankfurt. The WEA label set him up with these three girls from Surinam and let Kurt call the shots, which resulted in him playing almost all instruments himself. Featured on back-up vocals were however the newly recruited Supermax singers Cee Cee Cobb & Jean Graham, who Kurt had found on a trip to Los Angeles.
Since this is a Hauenstein affair, it features a few reggae-influenced tracks, much like all the Supermax records. And how much his affection with Jamaican culture may seem like a footnote to some of his fans, it can't easily be discarded. In 1983, Supermax were the first band with white musicians to play the annual reggae festival in Montego Bay along with Gregory Isaacs and Black Uhuru.
The song that is however most characteristic to Kurts musical legacy, as well as a statement of his unique uncompromising style, is a groovy mid-tempo cut called Hustlers Of Life Never Survive (check that one out here). But the stand-out track for dancefloor action is of course the now classic:

Thanks for introducing me to "Hustlers Of Life Never Survive"... Great song I have never heard of!