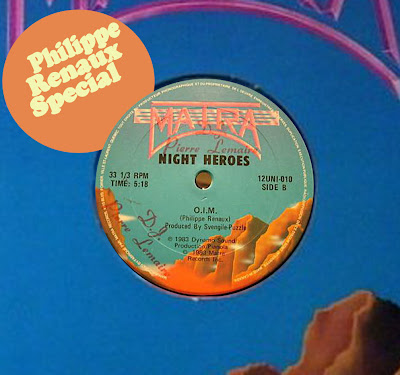 I just had to re-visit this old special feature I did on the french cosmic mastermind Philippe Renaux, since I found this extraordinary gem on the B-side of the Night Heroes Moroder-medley (produced by Silvio Puzzolu who also made a Kraftwerk-medley under the name Between The Sheets and produced the legendary Bagarre project). Sidetrack: how come nobody makes medleys anymore? Wouldn't everybody want to hear an Alden Tyrell-produced medley of Patrick Cowley tracks? Or a Lindström-produced medley of Philippe Renaux for that matter.
OK back to the matter at hand, O.I.M. is a collaboration between Renaux, Puzzolu & Luigi "Svengile" Venegoni (who was is Stratospheric Band) so you know it's gonna get heavy when these dudes get together. They start off with a tight uptempo boogie-beat straight out of 1983 and then throw in some surf guitars (!?) to keep it weird all the way to the synth/vocal chorus. The acronym of the song title may puzzle you at first (what could it mean? Open Information Model? Operator Interface Module?Ordained Interfaith Minister?) - the answer is of course much simpler than that, it's just a vocal translation and mimic of the squelshing sound that they churn out on that synthesizer. Genius!