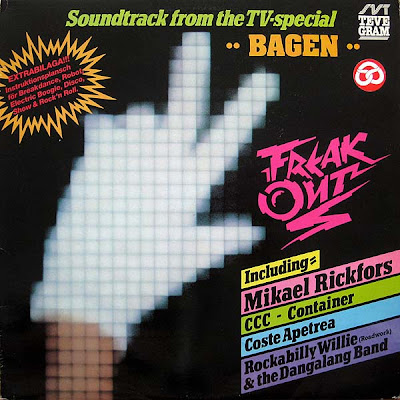 Bagen was a hip MTV-style show on swedish public service TV in the mid-1980's, hosted by the ever so charismatic Cia Berg (front figure in the band Ubangi and later on in the 90's band Whale), check out a collage of some of Cias "looks" during the different shows here.
One of the features of the show except to supply the latest music videos of the time was a segment called Freak Out, where Stockholm B-boy Karl Dyall would give informative examples of breaking, locking and making fun of asians (no kidding, just check out his opening act in thisclip!).
SVT also managed to put out this amazing record of some of the music that was made exclusively for the show, most of it produced by the prolific former prog-rocker Coste Apetrea. There's plenty of good stuff in the way of electro and boogie, and the Mikael Rickfors track is a cool and dark piece that could stand to be compared with some of Angela Werners best stuff.
One noteble track is also the CCC version of Kool Katt, the cheesy rap-boogie hit by the group STOP (there's a nice edit of the original out there by our Norwegian neighbour Rune Lindbaek). This version on the other hand tones down on the cheese and adds more ice in the way of L.A.-electro style drum machines. Oh and the record comes with an instructional poster on how to breakdance and do the electric boogie.
CCC - KOOL KATT
Upplagd av SERGIO RIZZOLO kl. 09:17