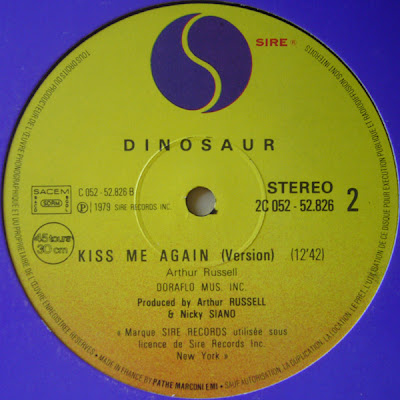 Earlier this year saw the release of an album made by a group of musicians who had worked with the late Arthur Russell. Under the name Arthur's Landing they put together some great songs in the vein of what we can imagine Arthur would have had them do. The result? Some kind of balearic jazz-pop soft-rock jams, mixed with a nu-disco feel by Breenan Green.
The band is comprised of people mostly involved in projects and recordings Arthur steered besides the disco oriented efforts, with the exception of Peter Zummo who did the amazing trombones on the Dinosaur L-classic Go Bang! Also a noteable inclusion is guitarist Steve Hall who has collaborated with Daniel Wang on many occasions.
Although none of these people were part of the recording of the Dinosaur single Kiss Me Again, the legacy of Arthurs sound and vision is unmistakeable when listening to the 12-minute plus version issued as a B-side to Nicky Sianos polished disco beast on the first two or three imprints of this single. Some free-spirited psychedelic disco-soul if one should need a description.