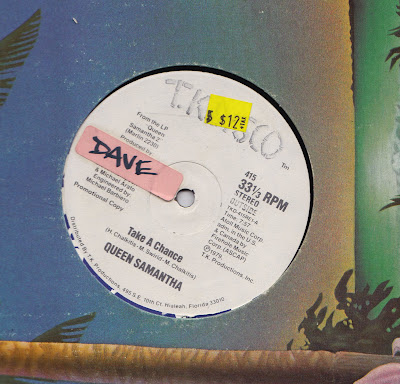 Earlier this summer I took a visit to New York, the Big Apple of Disco. And it was not disappointing, seeing almost every record store organising their crates according to the labels: West End, Prelude, T.K., Millenium Disco, Marlin etc. The store I found myself spending most of my time in was A-1 Records around the corner from First Avenue. As it turns out, DJ Harvey is admittedly also a regular at this joint. Hearing him spin on the magical soundsystem of Santos, playing one of my favourite records (Danny Darrows Doomsday) at peak time, was truly an experience. But hearing him chatting it up with Sweeney on BIS the same week was equally mindblowing, as he mentions a stock of records over at A-1 with some anonymous stickers with the name "DAVE" hand-written on them. According to Harvey, these records once belonged to none other than David Morales. And yes, one of these records had made it into my bag. The classic T.K. 12" of Queen Samanthas Take A Chance released in 1979. That same year, Morales was only 18 years old and under the mighty wing of Larry Levan, spinning at the Garage, the Loft and the Sound Factory. A piece of history that has formed the future of dance music ever since.