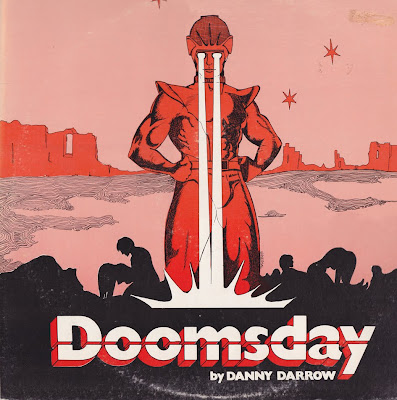 What the what is going on here!? Doomsday is here, apparently caused by a giant He-Man character shooting laserbeams from his eyes, so the best thing to do is get nasty with each other and "drown in our juices of love". Just take a peek at what's going down on the sleeve!
So was Danny Darrow a formerly devout christian who in the face of the confusing and corrupting climate of the 1970s lost his faith and decided to hell with it and went all in for the decadence? I'd like to believe so.
Anyhow this record is an ingenious display of sleaziness from start to finnish, all cosmic synthesizers shooting through latin percussion and electric guitars teaming up with saxophone bursts. The 12" Long Version which you get here also adds a couple of minutes of epic sequencer droning.
I can easily say this is the best record I own. And it's all thanks to my great friend Mathias who bought this without having heard it and decided to give it to me just because he knew I would like it even more. I did however trade in my double copys of Skatt Bros, Chaz Jankel & Peter Baumann, but it was totally worth it. Thanks Mathias!

You post what is possibly the best record I have heard in the last five years and no-one freakin' comments?!?

I was expecting rounds of spontaneous applause, offers to father your child, medals, keys to the city and all round "U ROOL dOOd" sentiments.

The first thought that hit me after sitting through nine minutes of jawdropping "my gods, someones has out Massierad Massiera" bliss was 'where have you been hiding all my life'?!

Then I hit the interweb contraption to find a copy expecting it to be £100-200 plus for a copy and I discover it reasonably priced at between £20-25!! Record prices really do not reflect how magnificent the record is (Signus's Black Hole & The Intergalactic Orchestra being the most notable exceptions).

You checked out the release he did directly before this called 'Telephones'? What can I say, this guy was on Cosmic Fire! That very nice Monsieur Willy who has made some amazing posts has kindly ripped the long version and tis' it not magnificent as well:

You're welcome my good friend!

We crate diggers need to stick together against the evil forces that wants to throw amazing old music like this into spider-web enclosed oblivion.

A seriously excellent track and the weird, sleazy lyrics, is the icing on the cake. Naturally I thought of you in an instant upon listening to it.

I'm happy you and your academy is sharing it with the world.
ox / Do the Math