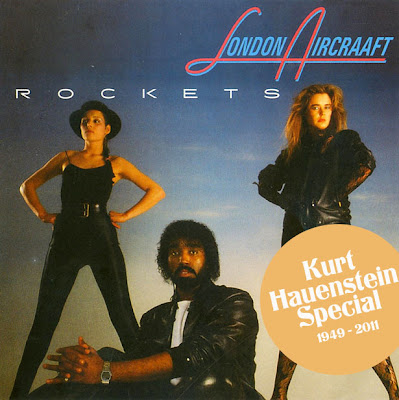 In 1984 Kurt lended a hand to Supermax backup-vocalist and percussion player Larry London, producing the album Rockets under the name London Aircraaft. The more boogie/80's soul-vibe may be seem far from the Supermax sound, but when the synthesizer line of Supergirls kicks in it is unmistakeable whose signature it bears. The laidback groove of Angie is also a superb bass heavy Hauenstein-track that fits perfectly in the slicker suit of London Aircraaft. In the same year as this album came out, Larry and Kurt also released a single of a cover of Kurts Supermax-hit Love Machine.

Other projects Kurt managed during the late 1980's are the hard-to-find singles of Nike (with Frank Bülow, later with Culture Beat) and Crazy Coconut, which featured Kurts daughters Judi and Nicola. The Disco Academy has not been able to track down these records unfortunately.

This is so fun - thank you!