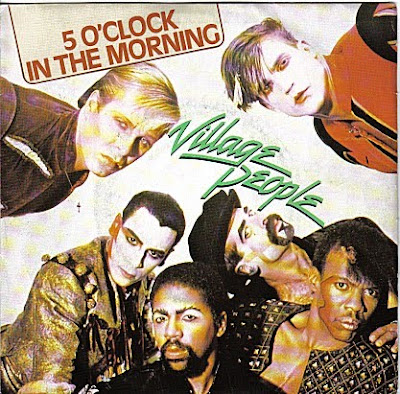 You could say it was quite unfair that Eric Duncan (Dr. Dunks) stole the limelight from Space Kudu with the release this year of a much praised edit of the same Dolly Parton song that the Kudu did a rework on just last year. But in the game of hype, credit is often overlooked in favor of some influential friends. And I hate to say it, but I like the slower cut that Duncan gives it.
So it's a hard choice not to agree with old Harvey that he is "pretty much the best editor on the planet right now". Especially since his latest (well it's new to me) effort under the C.O.M.B.I. moniker is a monster of a floorfiller. This time speeding things up in an epic take on Village Peoples 5 O'Clock In The Morning from 1980 (when the group was re-invented as a kind of new wave version of Imagination).
But - to be as diplomatic as I can - I would say that there is a thin but substantial line between an editor and a DJ, and whereas Space Kudu surely shines when it comes to unearthing rare and overlooked grooves, Duncan is the guy who can really play a record.