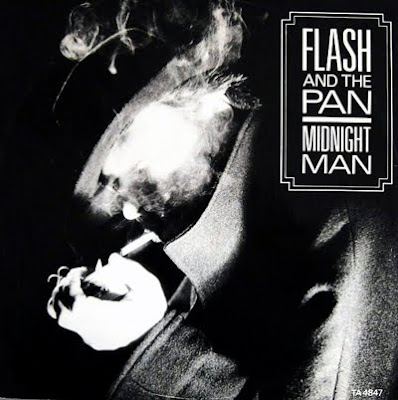 Inspired by Diskoakademin's post of Flash & The Pan's 1987 classic 'Ayla' I thought I would delve into my own collection of tracks from this strange and semi-obscure Australian band. Formed in the early dawn of pre-history (or the 'mid-70s' as some historians label it) their first release, the 1976 'Hey, St. Peter' was a hit both here in the UK and in their native Australia but it was the 'Walking In The Rain' flip-side that they are now better known for (if only for the seminal cover version by Grace Jones that was the opening track of her 1981 Nightclubbing album).

Between 1976 and 1982 they released a shed-load of records and in the process had a series of minor hits and near misses with the best known probably 'Early Morning Wake Up Call', 'Waiting For A Train' (check out the 1983 Italo-disco Moonbase cover of the track by Tony Carrasco of Klein & MBO fame, especially the killer dub) and the 1984 'Midnight Man' release which featured a couple of sleazy-groove infested remixes from Francois Kevorkian & Ron St. Germain which I have included here. First up is the ultra-rare 11 minute plus remix with it's tripped-out progesque introduction followed by the mighty instrumental dub. Is it at this point I say 'enjoy'? probably not...