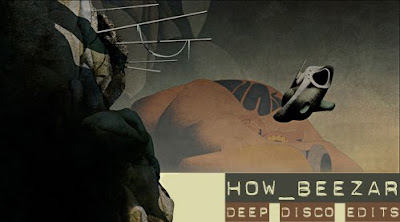 How_Beezar is a former Russian punk, indie & trip-hop drummer who spent ten years playing in a variety of bands before sucumbing to the sheer joy of the deep disco re-edit. One of his re-works is destined to create a tsunami of interest in DJ circles and here is a rare chance to jump on the bandwagon before it has even pulled out of hype station. The original track is by Russian artist/composer Yury Antonov and is called ‘I Remember‘ (or ‘I Reminisce‘ depending on the translation). It features on the soundtrack of the 1981 Russian film ‘Take Care Of The Women! and it is worth hearing the original just to grasp how radical the edit really is and plus you get a chance to watch some serious early eighties Soviet nightclub action!
Don't just take my word for it, here is what DJ legend and author of "Saturday Night Forever:Story Of Disco" Jussi Kantonen had to say about the track "Severely and rapidly addictive. Also very beautiful and sinister at the same time, like advanced science". If that wasn't enough, it has the seal of approval from the guys behind Overfitting Disco who commented "...the definitive dope indeed, now, a bootleg label must pick this one up, fast".
Until this gets released either officially or in bootleg form, feel free to send it, post it and generally spread it's love around in the smug knowledge you heard about it first! You can also get more of How_Beezar's amazing collection of edits by visiting his LiveJournal page. Also check out his incredible collection of proto-house and proto-techno tracks called "Tracks That Left Their Time Behind 1977-1983"

This is the second edit of a Yuri Antonov song we publish here at the Academy! Gotta be some kind of record.

How spooky is that, two Yuri Antonov edits and both are freakin delicious!
Clearly the sheer brilliance of Diskoakademin generates a strong synchronicity matrix or something like that....here's to Yuri's freakydeaky guitar licks!