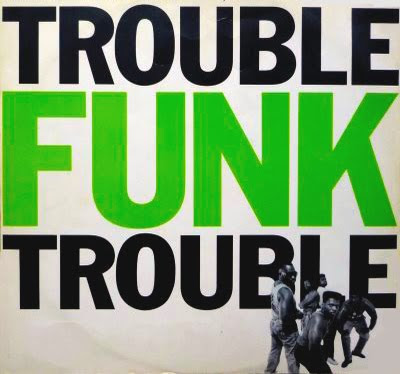 Every cosmic (or 'afro' if Beppe is reading this) DJ worth his space salt knows that between the slo-mo Moroder on methadone 110 chuggers there needs to be the occasional 'percussion freakout' and these two tracks, both clocking in at just over nine minutes, are 'da freakin' bomb' as the kids no longer say. Trouble Funk were a Washington D.C. funk band from the early eighties and perhaps more than anyone else, responsible for the 'Go-Go' sound.

What is the 'Go-Go' sound? Well, according to Kip Lornell & Charles C. Stephenson, Jr. in their definitive 2001 book on the genre, The Beat: Go-Go's Fusion of Funk and Hip-Hop:

"Go-go's essential beat is characterized by a syncopated, dotted rhythm that consists of a series of quarter and eighth notes (quarter, eighth, quarter, (space/held briefly), quarter, eighth, quarter)… which is underscored most dramatically by the bass drum and snare drum, and the hi-hat… [and] is ornamented by the other percussion instruments, especially by the conga drums, timbale, and hand-held cowbells."

Well, there you have it in an academic nutshell! The reason why most of the time "writing about music is like dancing about architecture"; sometimes you just have to feel the groove (and the odd space-synth outburst!). The two Trouble Funk tracks featured here were released as a 12 inch on Jamtu Records in 1981 and though they are not as well known as say their 'Drop The Bomb' and 'Pump Me Up' tracks, in my opinion they were the best thing they ever did and in the right hands, still have the potential to cause dancefloor mayhem to this day. 'The Beat (Part 2)' has the odd crackle & pop but for me this is the key track, the pounding NY post-punk Konk/ESG/Liquid Liquid beat loops and attack of the space-synths overdubs make it sound as go-go fresh today as it was when it was first released 29 years ago.