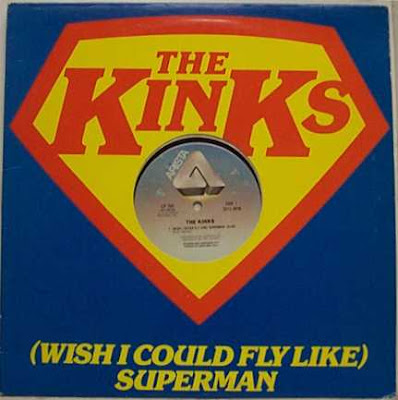 As this is my first post, it seems appropriate to reference where I live and in turn, allow you to be dazzled by the rich cultural diversity of Diskoakademin. The image above gives the game away doesn't it? I am of course from the imaginary city of Metropolis...sorry, I meant England (so easy to confuse the two) and what could be more quintessentially English than The Kinks and their 'mod' inspired visions of 'Waterloo Sunset' and 'Dedicated Follower Of Fashion'?

Only this is 1979, the whole world had become infected with the disco meme and even former English rockstars were not immune. As the Stones had already joined the disco party very succesfully the year before with 'Miss You', it is hardly suprising that other former 60s English rockstars would also be jumping on the glitterball bandwagon.

Recorded in New York as part of the 'Low Budget' album sessions, '(Wish I Could Fly Like) Superman' was released in 12 inch "Disco Mix Extended Edit" form while the album itself acheived the highest American chart place of any Kinks album. What I love about the track (aside from the flaying guitars, driving bass and sheets of synth wash) are the lyrics. Anyone who has listened to the words of their 'banned' 1970 single 'Lola' knows that Ray Davies can tell a good story and this is no exception, check out this wonderful rhyming couplet: "I'm too weak, i'm so thin, I'd like to fly but i can't even swim". Sheer poetry!
THE KINKS - (WISH I COULD FLY LIKE) SUPERMAN [DISCO MIX EXTENDED EDIT 1979]
Upplagd av the saucer people kl. 03:06

Way to go Paul! Cheers to your first post(of many) here at the Academy.
I guess it's my turn to churn out long comments to your posts now.

Sorry it took so long to get around to it but now that I have cracked how to post and divshare, I hope this will be the beginning of a long and fruitful shared blogging experience!