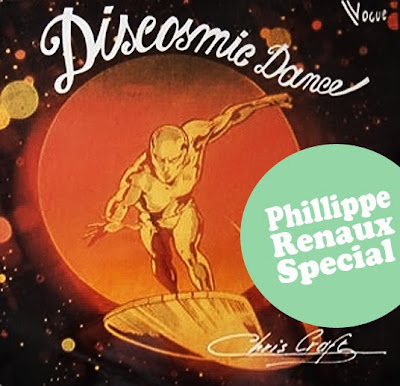 Since most of Renauxs best productions are dated to 1978, I'm not sure in which precise order they were released, so I figured why save the best for last and keep all you well-read disco afficionados patiently expecting this post to drop, one of the most revered and sought after cosmic disco albums of the past years, as well as being the arguably most amazing effort from the hands and mind of Mr. Philippe Renaux.
The album is Discosmic Dance, by the "artist" Chris Craft (who seems to be an orange coloured rip-off of the Silver Surfer).
In the same over the top fashion as the Van Duyne album, most of the track titles here involve the word "cosmic" in order not to leave anyone guessing as to what the theme is. But what makes this such an extraordinary album in comparison is the comic book-like affection in which this concept is embraced.
Also, of course, it's all about the music. Harsh and broody semi-electronic instrumentals far to the leftfield of the disco mainstream sound and at times with one foot in the door of the avantgarde.
It's hard to say whose intentions spawned this resulting record. One could imagine Renaux setting out to cash in on the current trend of all things cosmic and naturally turning to synthesizers in order to fuse this element into a disco sound. But amidst all the fun of jerking out wierd rhythms and tones from these machines he must have got too caught up to even try to make dumb danceable music out of what otherwise may have seemed a sordid project.

It strikes me that Renaux has the same incomprehensible charm as that of italian low budget exploitation-movie directors by the likes of Enzo Castellari or Jesús Franco. Always quick to jump on the bandwagon of someone elses sucess and turning out hasty copycat versions, but in the process of their own creative input set against heavy economic limitations manages to pull off something far more interesting or simply too hilarious not to enjoy.
By the same principle, anyone with just money on their mind could not have come up with something this wonderful.

Really enjoyed reading your review of the Discosmic Dance album and I loved your analogy to the films of Castellari and Jess Franco, absolutely spot on.

Speaking personally, the most interesting and paradoxically 'authentic' music for me isn't the overt avant-garde 'experimental' compositions, its the music and films of a given decade that were considered trash, cash-ins, exploitations or superficial ('disco' being the prime example in all its forms) or was not framed within the logic of the commercial music market such as library records and soundtracks to low budget films, for me they are the most interesting sonically & conceptually speaking.

I totally agree with you about the Discosmic album being unintentionally experimental and it really deserves repeat listens to get just how amazing it truly is.

The Philippe Renaux albums I would commit a crime to finally hear never mind own are of course:

The 1976 Jessy Joyce 'Love Me' album which you mentioned; Massiera, Torelli & Renaux together, my gods! what I would have given to be a fly on the wall for that session! Anyone ever heard it? The number of people who own it on Discogs? Zero! Worth it for the cover alone! Those saucy French ;)

If anyone has heard any of the three above please tell me how good they are so I can least experience a second-hand vicarious thrill..if I had a spare 180 euros I would snap them both up today! Gods knows how much the Jessy Joyce album would cost?!

A better rip of Chris Craft's legendary Discosmic album for all you zoned out space cadets:

I also found a rip of Doky's 'For Your Love' 7 inch which according to the credits Philippe Renaux was involved with along with Georges Blumenfeld (who together produced many amazing records including the Toni Van Duyne releases and with the equally legendary Bernard Estardy made the 'Daisy Daze' record) in the "remix" of said tracks....

....I am guessing Renaux and Blumenfeld were brought it to remix the original because it was so terrible and as good as these two guys are, as we say in England "you cannot polish a turd" ....someone mentioned it was terrible but hey, at least the cover is wonderful!

Albums left to track down:

A little bit more digging and I discover there is going to be a repress of the Space Pilots album at the end of the month (looks like a bootleg to me) but at 11 pounds its worth a look!

Also the same people reissued Discosmic Dancer which is out for £12 and the samples sound very clean:

And one other I have been wanting to hear for ages by the Sideral Group called 'Space Disco' by Monsieur Claude Lemoine:

Again, the samples sound very good!
None of the above albums are on CD or digital format so if anyone wants to buy any of the above vinyls I would happily pay half the money for a decent wav/flac rip of the albums.

As they are all no doubt bootlegs there would be nothing wrong with posting the rips on Diskoakademin!