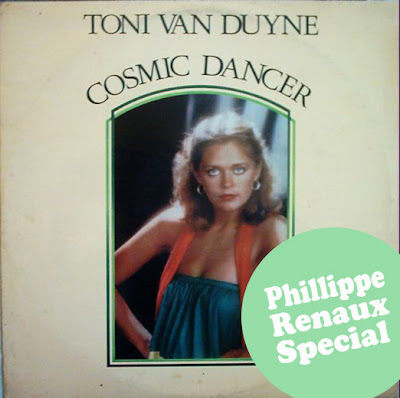 After my recent special on italian producer Alberto Radius, I thought I would continue digging up the forgotten names from the era of the disco producer.
And so I stumbled on Philippe Renaux; french composer, writer, arranger and producer as well as the label boss of the french Carrere sublabel Clever.
The story of his involvment in the disco business starts around 1977, closely after his collaborations with the enigmatic J.P. Massiera.
His full-on production efforts starts with the pretty conventional idea of establishing a disco diva by the name of Toni Van Duyne, a project which seems to have been fully orchestrated by Renaux. But from the get-go, Renaux had his mind set on something cosmic. A theme that would prevail in most of his commitments of the late 1970s and early 80s, and which is clearly evident here on Cosmic Dancer of 1978
On this, the first and only Van Duyne album apart from a handfull of singles, most of the production is soft midtempo disco-pop with modest hints of synthesizers thrown in for a sci-fi-esque effect, to fit the ever prevailing cosmic theme (which seems fuelled by an inspired fascination of Barbarella) . Be A Star works very well though, riding on a perky baseline aided by some funky synth squeezes.

I must admit apart from the truly spell-binding title track, the first time I heard the Toni Van Duyne Cosmic Dancer album I kinda dismissed it out of hand but on repeat listens it really grows on you, from the oh too short Cosmic Overture to the laid-back west coast vibe of Space Music and the melancholic 'Space Blues'..well worth tracking down.

Interesting the other person involved with Phillipe Renaux on mixing duties for this album was one George Blumenfeld who was part responsible for one my favourite late seventies cosmic disco stompers the Daisy Daze And The Bumble Bees "Planet O" which he co-engineered with the Le Baron himself Bernard Estardy.

There is one other track Phillipe Renaux & George Blumenfeld did together that I would love to hear, a single by Doky called 'For Your Love' (unsure if its the Yardbirds track covered by Chilly et al), just check out the cover!:

I wasn't aware of George Blumenfelds other work, I'll have to check that out.
The Doky single is not the same song as the Yardbirds/Chilly one, and not nearly as good either unfortunately.

Here are two versions of the George Blumenfeld & Bernard Estardy track I was on about, if you like 'em feel free to post them/send the links to anyone you think may like them etc:

Thanks for the heads up on the Doky record! What a disappointment, how can a cover that good be so misleading?!?