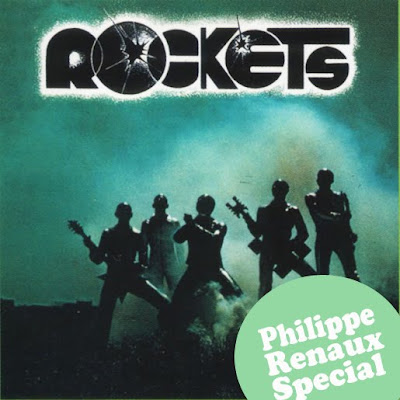 Renaux was long involved with the people behind the band/project Rockets, even during their forming years under different aliases, no doubt because of their shared love for the cosmic. Mainly credited as a writer, he penned their single Rocket Man in 1974 (as The Rocketters). In fact, according to reliable sources (i.e. the man himself!), he was the bands first singer
He is also credited as the writer of their most enduring production - Future Woman. What is less known is that he actually does the vocals as well as plays all instruments on this song (thank you for the scoop Philippe!).
This has the smell of J.P. Massiera all over it, whom Renaux worked with in 1976 as co-writer & producer (as well as bass player under the pseudonym Phil Honeyman) on the Jessy Joyce record Love Me.
Even though they apparently never worked again, it seems that they both took a lot of inspiration and ideas with them from that collaboration and channelled it into their coming work in the field of cosmic crazyness. Massieras later hit song Space Woman bears an uncanny resemblance to this Renaux piece. A friendly paraphrase or jealous rip-off?
As the concept of Rockets formed much around the idea of a rock band (they did actually tour as live musicians, including lasers and smoke machines of course), their sound is a mix of heavy psyched out rock riffs and funky electronic disco rhythms (needless to say, they're one of the greatest bands ever).
This sounds crystallizes to perfection in Future Woman, which Renaux made for them in 1975. A single (under their alias Les Rockets) was released the same year, however I favored the much harder and bass-driven 1976 Long Version from the self-titled Rockets album for this post.

Philippe Renaux did the vocals and instrumentation on Les Rockets 'Future Woman'?!?!? It all makes sense now, I always thought it stood out and while I knew he wrote the track, I had no freakin' idea it was basically his track....is this from the horses mouth so to speak?

As for JP Massiera & his half-bro Bernard Torelli appropriating Philippe Renaux's space disco futuristic visions, one could argue it was the other way around and the "proof" may be the 1974 Massiera/Torelli 'Visitors' album which predates the Rockets album by two years.

All the themes of space, aliens and UFOs against a rock/disco/prog backdrop can be found on the 1974 album, indeed a few of the tracks like 'L' Extra-Aventure De Villas Boas', 'Terre-Larbour' and 'Flatwoods' are explicitly about individual UFO cases that had taken place in the fifties and sixties.

However a more charitable explantion is the fact that in France at the time there was a huge interest in UFOs/Aliens/Space and Sci-fi in general and Philippe Renaux, JP Massiera & Bernard Torelli simply breathed the same French air and had a similar musical vision.

Having said that, I wonder if its a coincidence that Massiera & Torelli called themselves 'Herman's Rockets' when they released the single and album 'Space Woman' in 1977, a year after the Rockets released their debut album and the 'Future Woman' single..its is perhaps a co-incidence to far given the fact that both share two words 'Rockets' & 'Woman' out of four!

The great collector of the weird and wonderful Charles Fort once said 'Its steam engine time when its steam engine time' and I guess in France in the early/mid seventies the time was right...and thank god for those three otherwise the cosmic disco would be a very different animal had they not created what they did when they did.

Its great to see someone else showing some cosmic love for these French musical gods!

I've had some correspondance with Renaux via e-mail, and according to the man himself this song is his work alltogether.
Not sure though if he meant this version in particular or all of them, since they differ quite a lot. I've sent him the sound files of all the songs I've written about, since he hadn't heard them in a long time and could hardly remember anything about them.
But he calls them all "bon souvenirs" - a very charming man.

Excellent to hear that conformation of his role in 'Future Woman' is indeed direct from Philippe Renaux himself!

It must seem a little crazy (or at least unexpected!) for people like Renaux to hear that the music they created four decades ago is loved and cherished by a whole new generation, many of who were not even born at the time these records were released!

At the risk of repeating myself, this really is a sign that the music they were creating at the time was something completely special. At the time however, it was considered either 'novelty' disco music cashing in on the seventies fascination with 'space' and sci-fi or was simply ignored and marginalised by the music press and general public.

This is very similar to the Van Gogh narrative and the fact he could not sell a painting in his own lifetime because his vision and art was so different from the consensus reality surrounding him...he had to wait for the rest of us to catch up and that is what I think is happening for artists like Renaux, JP Massiera, Bernard Fevre, Sauveur Mallia and the rest of the cosmic pioneers.

One can also make the point that it is the same with the DJs like Beppe Loda & Daniele Badelli, they were creating something so new in both selection and mixing style that at the time it was very underground.

That is so freakin' cool that you are writing to Phillipe Renaux, you just know he would be a wonderful person and its great you sending him MP3s of his own music!
His "bon souvenirs"! What a guy!

I hope he appreciates just how rare, sought after and coveted albums like Jessy Joyce's 'Love Me', Discosmic Dance, Sideral Space and Space Music are...he doesn't have an old box full of his own releases in the attic I take it?, y'know taking up space.... ;)