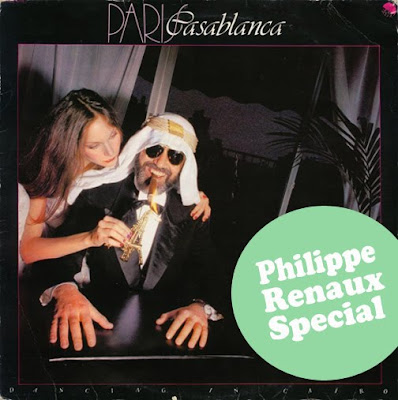 In 1979 Renaux produced and arranged this rather conventional disco project, working alongside colleague Rachid Bahri for the first time. They would later work together on a disco project called Modesty (named after its female vocalist we can assume) which resulted in a couple of singles.
Letting the cosmic fad rest a while, the theme here revolves around the luxurious pleasures of some exotic cities, namely Casablanca and Cairo. This idea however seems to have evolved from one of the album cuts on the Renaux cosmic masterpiece Discosmic Dancer, called "Casablanca is alright for dancing tonight".
Suitable to the theme, this is glittering and smooth disco aimed to please. A saxophone solo a bit on the cheesy side, a proper uptempo choir refrain and some steady drums. But the male vocalist really does a superb job of infusing decadence into the mix. And there's a very loveable break with oriental flutes and a synthesizer baseline.

Many thanks for sharing this, to be honest I always thought 'Casablanca Is Alright For Dancing Tonight' was one of the weaker tracks on the Discosmic Dance album (heresy I know!) but this more than makes up for it...what a voice!

For some reason it reminds me of the Don Ray 'Garden Of Love' album or something Boris Midney would have done around this time....excellent rip by the way, such clarity of sound