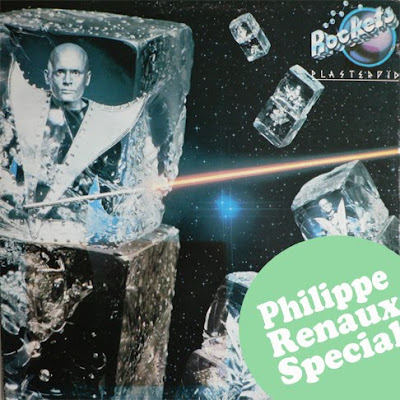 It's time for some cosmic feelings again. Another collaboration with his old bandmates of the Rockets. This is their "third" album, from1979 (the hectic discography of the band resulted in a lot of lumping together of previously released songs in re-packeged releases).
Here we have Renaux featured on writing duty again on the track Cosmic Feeling, but seemingly not involved with the instrumentation this time (although I can't be sure about that, my correspondance with Mr. Renaux has been sporadic and most the time he could not remember the specific tracks). Anyway, very enjoyable cosmic disco rock.

"Tensing to the music of the stars, has she come from Jupiter or Mars?"

Quality rhyming cosmic disco couplet! This is another of my favourite Rockets tracks and again interesting that Philippe Renaux was on writing duty for this one....I am really going to have to go through the Rockets writing credits, I see a pattern emerging!