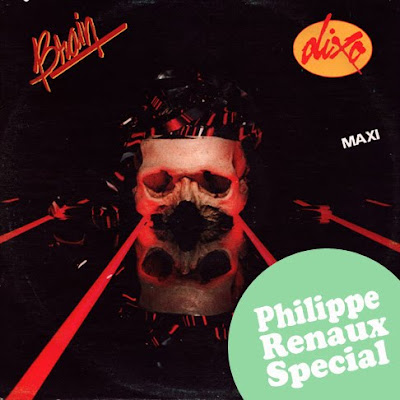 Definitely the most exciting and mysterious record I have found from the early career of Philippe Renaux.
Released in 1982 on Clever, Renaux own french sublabel to italo dominators Carrere. This however, is the amazing sleeve for a release on the Mexican label Peerless, which is the only release of this song where Renaux is credited under his own name. For the Clever release he has resumed his old alias Phil Honeyman.
Here we find him alongside Claude Mainguy on writing credits (a long-time collaborator who also worked with Rockets and as recording engineer on the Paris Casablanca record, as well as co-writing a B-side with Renaux for Massieras Venus Gang single Space Woman in 1981, just prior to this record).
The Clever release states Derek Arden on production credits, which is most likely another alias of Renaux since the Peerless sleeve credits both Renaux and Mainguy.
Too bad then that they never worked again under such circumstances, since this is a profoundly confusing and creative mix of early electro, classic disco and balearic guitars. Kicking of in a Timmy Thomas mode on the keyboards backed by stiff drum machines, this trip gets more funky by every second - adding vocoders and Funkytown-styled breaks before turning into a fullfledged anthem when Gil Slavin (a former back-up singer to Grace Jones) takes to the microphone.
Not your average disco record, and a worthy conclusion to our Philippe Renaux Special here at the Disco Academy.

Oh my freakin' gods, Phillipe Renaux was also reponsible for Brain's 'D.I.X.O'...that why its one of the greatest cosmic disco records of the early eighties and so far ahead of the game it could be released next Thursday on DFA or Rong tagged as the 'new sound on the block'...it all makes sense now!

Only ever heard the 7 Inch till now so huge thanks for the extended version, its even more demented and just reeks of such a sense of 'Otherness'...I am hard pressed to think of another 1982 record that has the same feel as D.I.X.O.

I remember seeing the cover on Discogs (I think) and going ga-ga over it though had no idea it was a Mexican only cover...makes sense I guess....skulls filled with things a la day of the dead and all that goodness.

Anyway, the Phillipe Renaux posts have been as fascinating and diverse as the earlier Alberto Radius retrospective....this is what blogging is all about, creating new knowledge bases, presenting music in new and different contexts, in short, feeding the head and the body.

I only realised last week that Renaux was also involved with the Belgian New Beat scene and two of the most defining tracks to come out of it; Dirty Harry's 'D'Bop' & Lords Of Acid 'I Sit On Acid'...no idea the extent of his involvment but regardless, those two records were hugely popular here in the UK and highly influential...people often forget that in the UK, New Beat was the first to enter public consciousness, 'acid house' came a few months later..well at least thats how I remember it!