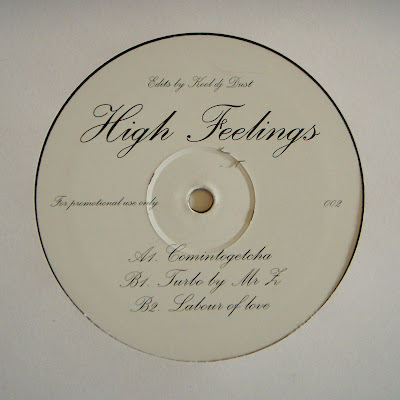 King Sling & Samo DJ finally closed the book last year and ended the saga that was High Feelings, one of the greatest yet most shortlived record labels out of Stockholm.
Three years in the running did however unveil such classic cuts as the COS MES Sadistic Skatepark 7", Kool DJ Dust The Disco Opera LP and some timeless techno from Over The Hill (Samo DJs excellent re-edit of an obscure library record).
High Feelings went beyond the re-edit scene with the way they presented themselves, and thus defined its greatest nerve as a cutting edge phenomenon of pop culture.
Here is an awesome New Wave-Electro joint from catalogue number 002.

Hi your blog is very nice

Weird you should mention High Feelings & Kool DJ Dust, I only just bought his 'Disco Opera' album yesterday after groovin' on his awesome 'Ancient Astronauts' EP for the last year and I was wondering about the label it was issued by...glad to know I am so far behind the 'scene' that it shuts down before I become aware of it! Definitely going to hunt down the back catalogue before the prices skyrocket!

Man, what do they put in the water in your country!? Can you bottle it and send some over to England!

This is a great edit, transforming FlashSystem's italo cover of "Five Miles Out" into real greatness.
Tack Danne!!