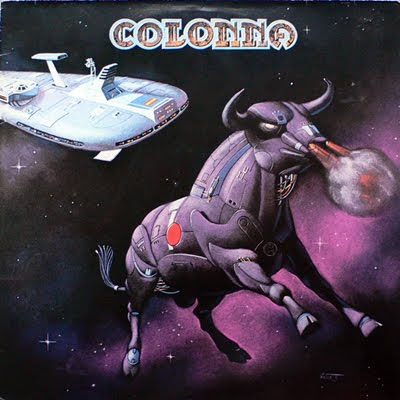 Space bull alert!?! Alberto teams up as arranger and guitarist on this monster of an album, the first and only interesting effort of classical guitarist Maurizio Colonna. Tullio De Piscopo on the drums along with an ensemble of other italian studio wizards.
Lots of peaks, breaks and rhytmic parts on this one, kind of going for that stiff but somehow funky orchestral sound of the likes of the Marlin Records output or Alec R. Constandinos epic concept albums, but here infused with some amazing and laughable Black Sabbath-like rock attempts and the classical virtuoso touch of Colonnas fast fingers.

Well, that ended the Radius week here at the Academy. there was a lot of stuff I would have wanted to share with you, but couldn't get my hands on - like the rare 7" by La Bellini, or the italo banger by Rick Skywalker. Not to mention the Patrizia Pellegrino single.
However, the great blog Kefir has an extensive coverage of his bonkers synth-ethno project Federico & The Marrakech Orchestra. So go check it out, even if you don't speak russian.