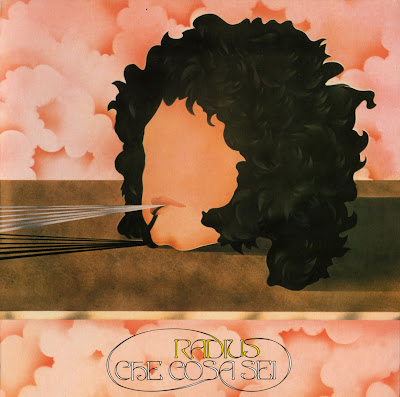 It's Alberto Radius-week at the academy! I think it's about time we cast the spotlight on this italian guitarist and producer and his strange and wonderful career.
No doubt some of us spotters on the bearded side as well as the hardcore italo heads have at some point crossed paths with a record discreetly credited to this man.
Although he has had a hand in a comprehensive output of italian disco singles during the golden years of the early 1980s, no one seems to have picked up on the red thread that is his distinct sound and pointed it out as a mark of quality in the same manner bestowed on the likes of Bobby O or Patrick Cowley. Possibly due to Radius more dominating connection with prog and avantgarde as is evident in the releases under his own name and his inclusion in psych-group Formula 3. But to prove my point, you only need to give a listen to this cut from his second solo album; a heavy chunk of bass & drums funkrock turned into soaring string-driven disco pop, keeping both a slick and proggy appeal that ties the whole track together.

This is such a funky slice of a perfect progrocking groove...to be honest its a bit of a revelation, I loved the 1970 Lucio Batisti produced Forumla 3 'Dies Irae' album (so over the top with its pseudo-gregorian chants and prog histrionics but damn those Italians seem to be the one nation who can pull these things off) but I never connected it to one of my all time favourite Italo tracks, the wonderfully named Freddy The "Flying Dutchman And The Sistina Band" and their Wojtyla Disco Dance track (the penny dropped why you posted it!)

Which album is this off? You said it was his debut album which according to Discogs is the 'Carta Straccia' album from 1977 but there is nothing on the Discogs track list similar to "La Meta"....it would be great if you could clear up the mystery...it says Tullio De Piscopo did the drumming on the album which would explain the tight 4/4 groove on this track...

PS> you ever come across his 1979 single under the name 'La Bellini' and the wonderfully named "Satan In Love"? I have only heard the flipside on a Youtube video called
"Far L'Amore Io Da Sola" and that is an amazing discoid synth breathy vox late seventies workout.

Well again, Discogs is not always reliable. According to a lot of googling, his first solo album is just called Radius, and since La Meta is nowhere to be found on any other record I had to asume it to be on this one.
I missed the Tullio De Piscopo connection! Would be nice if this was a collaboration with him. But I'm afraid the mystery remains, since the only info on this record I could find was a photo of the cover.
I've been searching high and low for the La Bellini stuff ever since I decided to look into Alberto Radius, but with no luck yet.
Thanks for another great comment!

Ok, it turns out this is from the album "Che Cosa Sei", which is supposedly his second album, released 1976. I changed the info in the post.