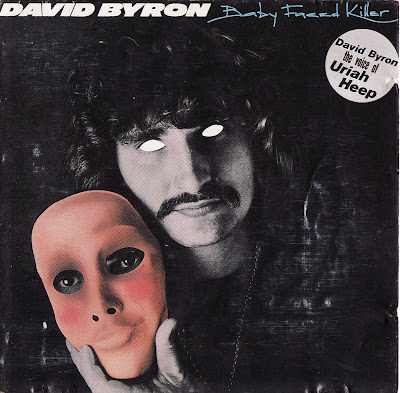 This guy, besides being the voice of Uriah Heep for a while, is also one of the men behind the cosmic masterpiece The Ultimate Warlord of 1978, as one half of the brief group The Warlords with Peter Green (not that Peter Green though).
And later during the following year of 1979, also together with Peter Green, they released the album Super Nova as Intergalactic Orchestra, which is even harder to get your hands on than the Warlord-single.
With a resume like that in your bag you can't really go wrong, right? And so in the same year as The Warlords hit the discoteques, Byrons solo debut hit the racks with a curious blend of blues rock trivialities and a black sheep in the form of proto-italo afro rocker African Breeze. Being a perfect blend of of the seemingly unlikely career personas Byron was juggling at the time, this track hits hard with all the right moves, and I'm amazed I didn't hear of this sooner.
It's much likely that this is the ace of secret weapons up many discjockeys sleeves.

this is an absolute killer.thanks for sharing

I thought it was Daniel Boone with David Byron who was behind the original 1978 version of Ultimate Warlord (As the Warlords)..perhaps it was all three of them!

I agree with you that the 'Super Nova' album is one of the best example of dark seventies cosmic disco imaginable (though I have never had it only vinyl, the $700-$800 dollar price tag is just a little to much!)

Anyway, thanks so much for sharing this track, its dancefloor devestation!

The info on Discogs is not the most reliable, so you're probably right that it was just Boone & Byron since the Warlord-effort is often contributed to them as a duo, and there is no clue to what Peter Green had to do with any of this.

There's another production credited to them on Discogs, a 1979 12" under the name Teknique, anyone who's heard it?/Got it?

yes this is one of my secret weapons, Intergalactic Orchestra too.. if you play out - play the originals or don't play it at all