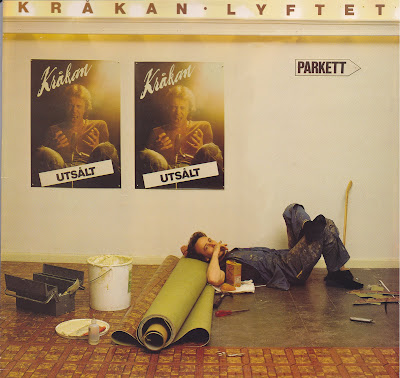 Åke "Kråkan" Nilsson had an on and off musical career between working for his fathers carpeting company, which he eventually took over. You can see him hard at work here on the sleeve for the 1980 album Lyftet. He now operates dance courses in Åkersberga.
This boogie-monster of a track, eluding to the swedish porno magazine Lektyr, is a sleezy but witty wordplay of rhymes where the natural association to various swedish words for certain body parts is substituted and censored with a drum break, only to break the build up of uttering a dirty word by throwing it into a completely different direction when the groove picks up again.
Björn Skifs did a similar prank on his disco-dabbling effort Hela Natten Lång, when a simulated orgasm turns out to be just a sneeze.