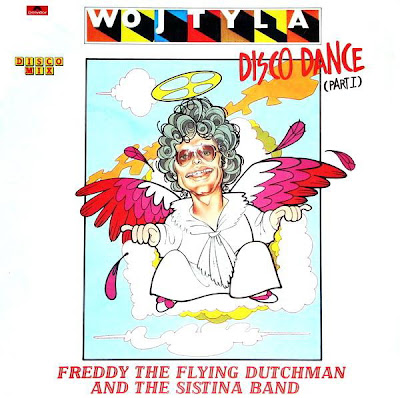 An early italian disco rarity often contributed to Stefano Pulga (although he is merely credited as a co-writer). The three releases made by this strange project were all either arranged or written & produced by Alberto Radius, along with different musicians.
The title refers to the Vatican pope Karol Jozef Wojtyla, who got the job in 1978. Apparently a pretty uptight pope, this was probably a very satirical remark on his behalf.
Stevie Kotey picked this one for his compilation Disco Italia: Essential Italo Disco Classics 1977-1985 on Strut in 2008.
With its wonderful blend of proto-italo electronics and classic New York disco funk baseline, this is one of the best works in the Radius catalogue.

Always wondered where the weird title came from, I had no idea it was the last name of Pope "John Paul II"....who says music blogs are not educational ;)