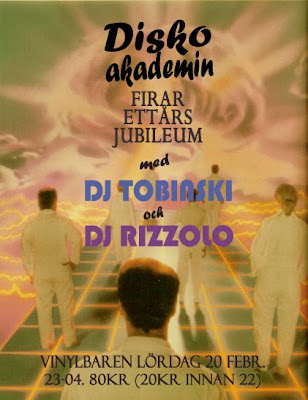 On the 13th of February 2009 the Disco Academy first set up shop here on the internet and in the celebrated recordstrore Rundgång in central Malmö, since then we've sold a bunch of records that have satisfied the disco cravings of both locals and out of towners.
Supplying mainly unknown gems from the sidetracks of the late 1970s disco-boom to the whacked out album fillers of major international artists, as well as overlooked efforts from the Swedish music scene of the 1980s, we hope that the Disko Akademin sticker of approval will in time earn a value of its own.

Here on the blog we've had the pleasure of introducing the skills of producers & DJs like Albion, Vidderna, Lugnet, Giulio DJ, Dompteur Mooner, Phantom Dogs Disco, Schmami, Tobinski, Bogdan & The Robot Scientists, just to name a few. Under this year we have connected dots, passed along praises, made wild associations and accusations and probably stepped on some toes along the way.
We hope to keep doing what we're doing for another year, and hopefully improve this blog and our skills in hunting for the cosmic & far out exploits of dance music.

This saturday we will celebrate our bithday, conveniently enough, at the Vinyl Bar of KB.
DJs Tobinski & Rizzolo will keep your mind on its toes through the evening from 22:00 to 04:00.

This is the link to the FB event for more info.
Upplagd av SERGIO RIZZOLO kl. 07:45