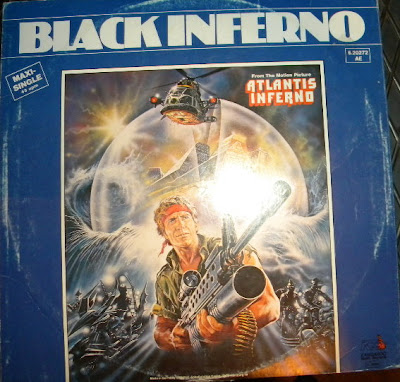 This amazing display of cinematic excellence that is the movie Raiders of Atlantis (or Atlatis Interceptor, or Atlantis Inferno, or I Predatori de Atlantide - depending on which country it was released) was conceived in Italy with a semi-american cast in 1983. The story takes place in Miami 1994 when the population of Atlantis appear out of nowhere due to nuclear radiation of course, and they're a pissed off biker gang with face paint and uzis ...of course.
Apart from the amazing acting and scenery, the music is ace. Totally saucy boogie-disco and arpeggio mood pieces laden with rocking guitars and that typical "action" drum sound.
Guido & Maurizio De Angelis are the brothers behind this soundtrack as well as countless other italian movies of the 1970s and 1980s.
The main theme was released as a 12" single by Kangaroo Team Records under the name Black Inferno. According to Discogs that's also the title of the track, which makes sense since it is sung repeatedly throughout both the instrumental and vocal version (with plenty of macho growling)
BLACK INFERNO - THEME FROM ATLANTIS INTERCEPTOR (INSTRUMENTAL)
Upplagd av SERGIO RIZZOLO kl. 04:26

Thanks so so much for sharing this absolute 'what makes cosmic disco music wonderful above all other forms of music' track...I have only ever found the two tracks in crappy 128 birate that were so bad, the rip I made of a Youtube post of the track sounded better! I remember nearly falling off my chair when I first heard the track..its my contender along with Baccioti's 'Black Jack' extended version as one of the best darkside-italo-disco-cosmica tracks ever realised (or at the very least the two best Italo tracks that mention the word 'black' in the title, that shouldn't be too controversial should it?!)

You sir, are a star for sharing this!

I am back! Haunting this blog with yet more requests like the demanding Brits we are ;)
Any chance of sharing the flipside of this? You know it makes sense!

The flipside of this record is the vocal, but there's not much difference to the two versions since the instrumental has some vocal parts as well. But that's just my opinion.