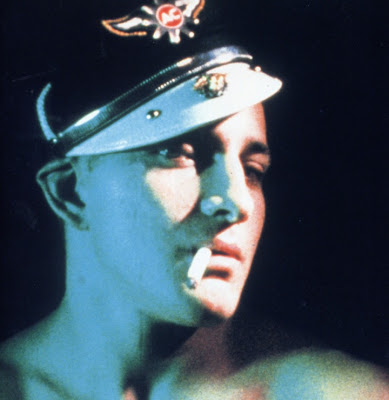 I was just informed by my friend Nora that the probably happiest gay man in Berlin, Mr Daniel Wang (who I by chance happened to mention in my previous post), is playing here in town just two weeks from now! All thanks to the ambitious and broad agenda of our local techno patron Adam Lundberg (of Röda Rubinen).

The California-born dj, producer and record label owner has become synonymous with the renaissance of the classic disco sound of the bathhouses and Fire Island of the late 1970s, starting off in the mid-1990s by adopting a strictly analogue approach to producing and releasing dance music on his Balihu imprint, as well as through his work behind the dj deck defending the legitimacy of the dramatic & joyous disco sound away from the mere patronising grips of "cheesy". This ongoing love affair extends into a very perceptive vision of a dancefloor that has more in common with the social ethics of predecessors like David Mancuso or Larry Levan than most of his contemporary dj collagues. This is quite evident in a recent piece he wrote for Self-Titled Magazine, listing his favourite choices in this category.
The links to gay culture is also obviously relevant to this musical legacy, and in Daniel Wangs case the connection between the two is constantly blurred. Most notably in the 2002 release of the 12" Panoramic, featuring as a B-side Two Tracks We Made In 1999 For A Gay Leather Video, which by its title pretty much tells the story straight up. (...did you get the word-play pun on that? A bit cheap, yeah?)
What might chock you though, at least if you are straight, is that this is not an energetic or sleezy display of effective grooves & hooks that we commonly associate with pornographic soundtracks, but a rather sensual, melancolic and even romantic track composed with simple, delicate synthesizer melodies and drums.

(On the vinyl release, both tracks share the same title. This is only the second track, b3.)
Upplagd av SERGIO RIZZOLO kl. 06:24