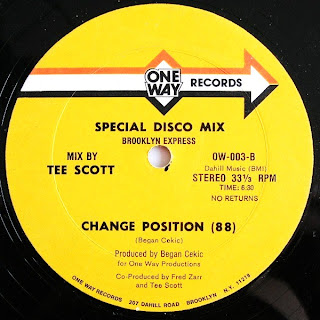 I have been very absent here due to a whole lot of field trips and archeological work, so rest asured that I have plenty of great disco treasures for you to study before the year is over.
The last week I've spent in Barcelona getting my fingers covered in dust and arguing with spaniards about over priced and worn out rarities.
Luckily a was able to dig up some primo spanish stuff as well as some new favourites, like this extremly hard-hitting instrumental groover from the masterminds of disco legends Tee Scott and the Yugoslavian Began Cekic, known mostly for his cover of The Police Voices Inside My Head under the alias Common Sense.
Dollar Bin Jams has an excerpt from an interview with Tee Scott conducted by Daniel Wang that sheds some light on the business behind these rather raw renditions of then contemporary disco productions.

Hey, I was at an electro-rock concert in Helsinki this week when one of the bloody musicians picked up a flute and started playing... Your Balearic mission is succeeeding all too well!