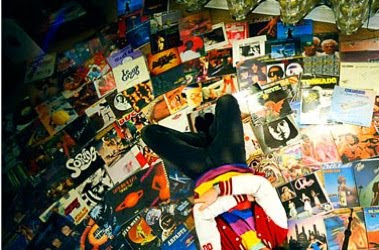 The slogan in swedish that you see under the Academy logo can roughly be translated as: the hunt for the cosmic vinyl.
No one has taken that quite as litteral as the two longtime friends Charles & Mitch, who run the independent online webshop Cosmic Dudes, a place where the most obscure records ever produced finally see the light of day, and end up in the hands of true connaisseurs ready to spend that extra dime.
The Academy has the honour of hosting a current Top 3 courtesy of the dudes themselves, kicking off in epic proportions with this disco bomb picked by Charles:

"I picked a very great track to start with, which had amazing success in our store and which I believe has everything you’d expect from a good disco dancer.
Victor Bach has been behind some silly disco material, then delivered this supercool disco monster that i found a few years back and then re-discovered when looking up records for a possible compilation last year.
I shared this finding with my soulbrother John (http://johncampoxford. blogspot.com/) who recently did a fantastic edit, tightening the whole bitch to the max. The edit will be released on vinyl soon. This is the original full lenght track, ripped directly from my vinyl. Some of the vocal parts can be missed, that's why we did an edit, but overall this is a very timeless, slick, unearthed track , which leaves you wondering why this wasn’t huge
back then."

This is just an epic track and why the masses are not filling the comments section with lavish gifts and offering tokens of worship is beyond me...the Cosmic Dudes post a track! The Cosmic Dudes! And my gods, what a track... a hyper-funktional monster truck groove with the vocals pitched just right...low in the mix and a catch-call chorus floating on a sea of blissed out soft-focus disco swooning with occasional submarine sound/oceanic piano injection

Can we get a re-up, please? Tackar!

Plus one for the re up.
Thanks!

You've got yourselves a re-up! Go nuts with it.