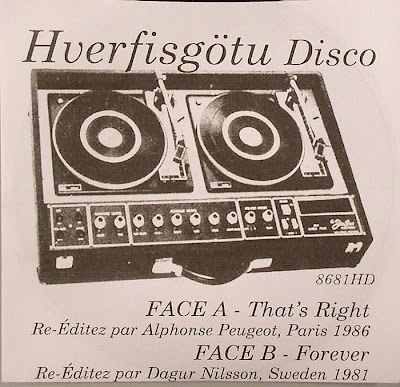 In the business of disco, everything and nothing is true.
This can certainly be said of Icelandic label Hverfisgötu Disco, and their first seven inches released to the outside world.
According to the legend, Hverfisgötu is the name of the street in Reykjavik where these two visiting disco producers hooked up to check out the Icelandic club scene sometime in the late 80's. Since the locals were generous with the hard liquor, the team ended up losing a bag of tapes containing re-edits of current American disco music.
These tapes have been circulating among collectors and djs in Iceland ever since, and only now have these treaures been printed onto vinyl and shipped overseas. No doubt due to the recent bankrupcy caused by the finacial crisis.
Dagur Nilsson now lives in Malmö and runs Rucksack Records, a label that with pedantic precision tends to the upholding and development of the Chicago house legacy.
He has kindly offered us one of these lost underground tracks, Forever, which is a frantic rendition of Donna Summers Moroder-produced Our Love. Enjoy!

You can find it on Juno here
Upplagd av SERGIO RIZZOLO kl. 13:11