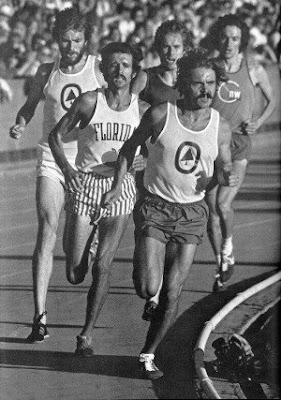 I came across this awesome balearic track one late night watching a made for TV-movie about American athlete Steve Prefontaine, a long-distance runner who competed in the 1972 Olympics in Munich (the one with all the terrorists and hostage situations).
He's portrayed with extra handsomeness by a blonde moustache-clad Jared Leto, and as he's out on the tracks prepairing for the race against his Finnish arch enemy Lasse Virén, this weird mash-up of heavy rock and Ibiza chill out, which by all logic should be an offense to all good taste, comes soaring in on the soundtrack.
When something is just so wrong, it can only feel right.
Upplagd av SERGIO RIZZOLO kl. 05:03

Always good to see someone else digging the genius that was 'Beautiful People'. The sad thing is, this outfit were too far ahead of the musical curve. Maybe if this was released now and not 18 years ago, there would be much more of a receptive audience for their Hendrix infused balearic sampledelica...

Here is a really good rip of the 1992 CD featuring lots more Hendrix sampled songs and it also includes the 1994 remix EP:

After sharing all these amazing rarities on your blog its the least I can do to give something back...my gods, I just realised, this was released in 1992 back when I still thought MDMA was going to transform the world..in a strange way the late sixties and early nineties were isomorphic, music and culturally speaking, its funny how optimism peaks just before the darkness returns and now I feel on a species level the darkness is once again lifting..but hey this is a music blog, so enjoy the music!