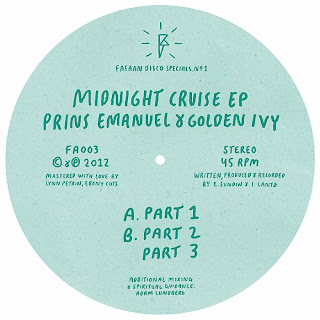 My good friends of Fasaan Recordings are about to release their first 12", following up previous 7"-singles by afro-project Enjebeye and rocksteady-band The Soularks. This time it's the duo-project of 2/3 of the labelowners themselves (Prins Emanuel & Golden Ivy) under the parental guidance of a bright new series called Fasaan Disco Specials. With inspiration from heroes like Arthur Russel, Walter Gibbons & Tom Noble as well as from extensive DJ-ing uring the last two years, the Fasaan-story has taken a new turn. Disco, Boogie & Dub are the cornerstones of this new sound, spanning from 117 bpm uptempo disco to 92 bpm dubbed out stoner boogie. The trademark Fasaan-style organ riffs keeps the tracks on the same path, piercing through the vibrant live instrumentation and holding us from drowning in the endless depths of the baselines. With some help from local house-guru Adam Lundberg (of Geography Records) these tracks are guaranteed DJ-friendly dancefloor cuts.

The mainstream popcultural blog PSL (a part of SVT) has even picked up on the duos dance music in a recent feature.
The 200 copies limited 12" will be released sometime around the 12th of January. Keep an eye out on the release over at Juno.