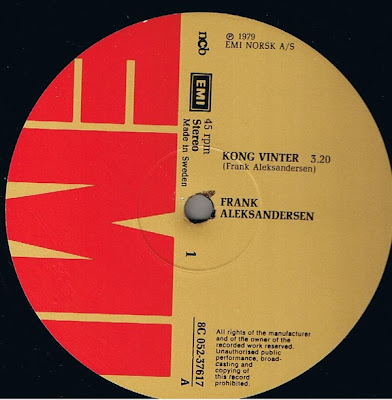 Our friend Crinan from Gothenburg has dug up some primo norwegian disco. I first heard this in a mixtape by Tiedye, another couple of guys from Gothenburg, made for the music section of the danish fashion label Wood Woods excellent website.
Back in the 90's Crinan made electronic dance music released on Börft Records. Now he runs the music blog/club Mind On The Run and is together with a friend responsible for the Parlour releases, some of the hairiest and most wildgrown edits put on vinyl over the past couple of years.
This one is jawdroppingly rough and funky progrock groover. Åke Aleksandersen in fact started out as a hairdresser in Oslo, and then moved his way to the microphone by playing drums in a jazz band. The songs title refers to the king of winter, a common figure of scandinavian mythology, which seems to have taken over as the unchampioned ruler of the weather during the last days.