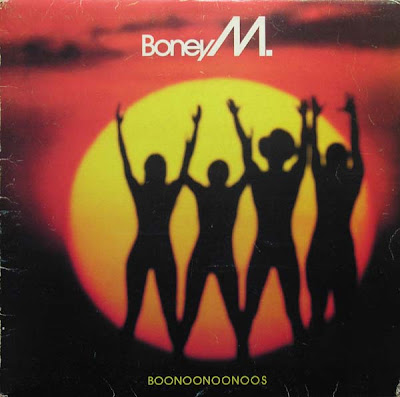 The central piece from the exhibition at Makeriet was as you could tell the record Boonoonoonoos by Boney M (yes, that's eight very good uses of the letter O, nine if you count the one in Boney).
German svengali-like mastermind Frank Farian took on the music business with perhaps the most postmodern of approaches in the making of a band since the debacle surrounding the Monkees. He would later go on to outdo even himself with the creation of Milli Vanilli (I think you know the story).
But let's put aside whatever can be said and thought about Farians commercial strategies concerning Boney M and focus on what's really important: the music of course.
The credit list of musicians for this particular record reads like a who's who of international studio whizz kids of the 1970s disco scene. Curt Cress & Keith Forsey on drums, Mats Björklund on guitar and Christian Kolonovits as arranger. With a dream-team like that no wonder they pulled off the balearic kraut-epic Boonoonoonoos, the italo style electronic Silly Confusion (re-cut by Todd Terje by the way) and the laidback funky disco rock of Breakaway.