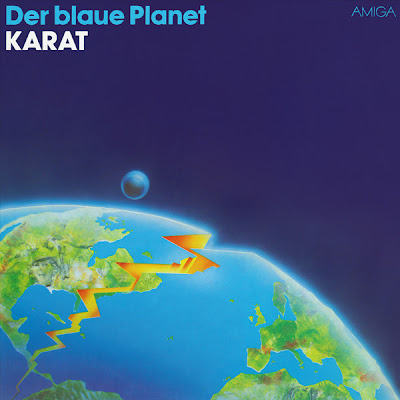 As it turns out, our friend Giulio DJ put together an edit of the Karat track just a few months before the Lunar Jam version came out. He in turn first heard the track in a mix by Lindström from two years ago, where the vocal parts were cut out.
Which is probably were Ticker & Cristoidz got the idea for the Lunar Jam project.
With some stuff that's out there, it seems the sheer potency of the grooves is just waiting to be picked out of some dusty bin, that it spreads like a virus when discovered thoughout the collective mind of the cosmic connaisseurs.
The same fate that befell the Christian Bruhn-soundtrack to Timm Thaler last year, resulting in a multitude of reissues and re-edits (including my own of the Wetten, Dass? track)
Our friends Parlour of Gothenburg experienced the same effect when a now well-known Phoreski edit hit the shelves just as they had placed the order with a vinyl pressing company for a release of the same material.
Such is the nature of the re-edit "industry" so to speak, it's a jungle out there.

P.S! Be sure to check out Giulios monthly mixtapes on Myspace. Overflowing with cosmic delights and original material.
Upplagd av SERGIO RIZZOLO kl. 03:02

In case you're wondering why this post is referring to a previous post concerning Karat and the Lunar Jam edit it's because there was such a post, containing the original version of Blauer Planet, made available for free download.
This post was deleted entirely along with text material by the DMCA (Digital Millenium Cpoyright Act) due to an alleged infingement upon copyright laws notified by The International Federation of the Phonographic Industry (IFPI).
Thank you for taking interest in the Disco Academy!