IT'S THE MAIN STEM 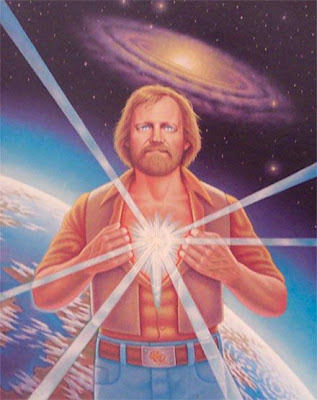 To rummage through David Bumpstead's (of Disco Not Disco) public MediaFire account is the electronic equivalent of exploring a really nice record store, you're bound to find something.
As did I in the overlooked efforts of Main Stem, the cosmic cowboys who apparently rule the city streets of Birmingham and Stafford.
I am not sure what the original is behind the re-edit Creative Use Of Space, but it starts out as a wierdo space-disco journey and ends up in something reminicent of Hot Chocolate, so I would have to say the title is apt in its description.
Kick Uri on the other hand is a dubby edit of Ciquri by Material.
The legendary Swedish disco DJ Sydney Onayemi (first to use two turntables over here!) had a plaque on the wall of his club Big Brother with a quote from this song: THIS DANCE IS NO WHITE MANS BUSINESS. This was in Stockholm, in the early 1980s (!!). When it comes to legends, that's on a crap your pants-level.
MAIN STEM - CREATIVE USE OF SPACE
MAIN STEM - KICK URI
Upplagd av SERGIO RIZZOLO kl. 07:11

EH... Sydney the first ever to use two turntables in Sweden... grow up!

Ok I will if you tell me who was first.

Thanks for the support Chris! Well of course, everything on Another Night is brilliant, since you have impeccable taste!

The Main Stem 'Creative Use Of Space' is a re-edit of the classic Undisputed Truth 1979 cosmic disco killer 'Space Machine'. As much as I love the work of Main Stem, nothing compares to the original, some things are better left untouched...I can guarantee if you hear it, you will agree and I can further guarantee you will be dropping it at your next party ;) If you cannot find it, I have a decent rip of the track I would be happy to send you....jackamo23ATGmailcom

The Material re-edit is another matter, I think even Bill Laswell himself would be impressed, I love how they have tightened the groove while maintaining its wonkiness and the overlays of voice, electric riffing and weirdo percussion make it sound nothing less than the next LCD Soundsystem release!